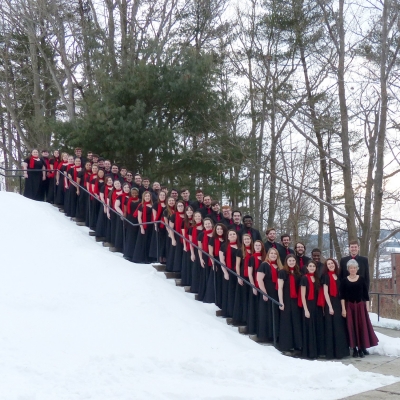 Today we present The Mansfield University Concert Choir of Mansfield, Pennsylvania, directed by Peggy Dettwiler for more than thirty years. The group has achieved an impressive reputation of excellence, having been chosen to perform at conventions and festivals around the world including numerous conferences of the American Choral Directors Association, the National Collegiate Choral Organization, and the National Association for Music Educators. The choir has won top prizes in international competitions including eight Gold Medals at the World Choir Games and four Gold Certificates at the Harmonie Festival. In 2012, the women of the Concert Choir provided the nuns’ choruses for the “Sound of Music” Gala Concert in Carnegie Hall. In 2014, the choir gave their debut solo performance in Carnegie Hall as a part of the Performing Arts Educators 8th-Annual Invitational and returned to this renowned stage in 2017 & 2019. The Concert Choir has performed in eighteen countries during their eight European Tours, and the group has recorded twenty-two CD on the Mark Custom Recording Label.

Today’s recordings were made fall semester 2020 during the Covid-19 pandemic with protocols set forth by the university administration and the state of Pennsylvania: singers always wearing a mask, distancing at least six feet apart (side to side and front to back), in appropriately sized rehearsal spaces depending upon the number of singers in the ensemble; and with limited 30-minute rehearsals followed by airing out the space afterwards. The students followed them with dedication and commitment as they wanted to be able to sing together.