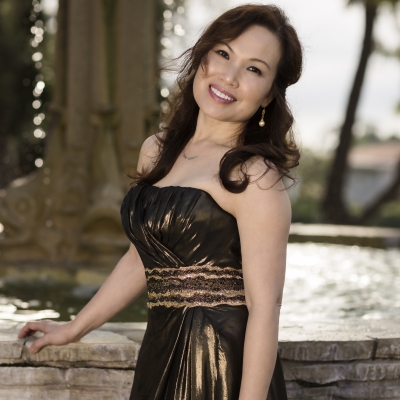 Today we present pianist Anli Lin Tong, praised for her “exquisite pianism” (Chinese-American News), for her “pointed grace” (Los Angeles Times) and “energy and elation” (The Daily Telegraph). She has performed in Europe, Asia, and the United States as a concerto soloist and chamber musician in prestigious venues such as the Avery Fisher Hall (now the Geffen Hall) in New York’s Lincoln Center, the Getty Center in Los Angeles, Taipei Symphony Hall in Taiwan, and the Bordeaux Opera House in France. As a soloist, she has performed with the Taiwan Symphony in the Taiwan National Arts Festival, the Chinese Fine Arts Orchestra, the Bratislava Chamber Orchestra, the Livic Chamber Orchestra, the Columbus Symphony Orchestra, the Burbank Philharmonic and the Beach Cities Symphony Orchestra, among others in concertos ranging from Mozart, Chopin to Gershwin and Bartók. Her performance of the award-winning Concertino for Piano and String Orchestra by KUO Chi-Yuan was praised as the “best rendition of this work” in Taiwan Symphony Review. She was honored by a reception by former President LEE Teng-Hui of Taiwan, and subsequent honors include “ACME Artist” recognition by Mu Phi Epsilon International Fraternity of Musicians and “Outstanding Woman in Music Award” by South Bay Chinese Woman’s Association of Los Angeles.

Beginning piano at age five, Anli was awarded First Prize on the first nationally televised competition in Taiwan at age nine. That same year, she received an invitation to study with the legendary Polish pianist and pedagogue Mieczyslaw Munz under the auspices of Taiwan’s Ministry of Education. At The Juilliard School, she was the youngest student in Munz’s class. In 2000, Anli Lin Tong was awarded a full scholarship to undertake doctoral studies at UCLA, but her D.M.A. course was interrupted by a catastrophic medical condition. After a near miraculous recovery, Anli Lin Tong returned and advanced to candidacy in fall 2018 at UCLA where she is currently completing her doctoral dissertation on the life and death allusions in Béla Bartók’s Third Piano Concerto, the final work of the dying composer who raced against time to complete it (short of the last 17-bars) as a farewell gift to his wife Ditta.

Anli Lin Tong credits her late parents, Dr. and Mrs. En-Kwei Lin of Taiwan, for imparting to her the belief in the nobility of the arts as the impetus for the good in humanity. Her late father’s life story - a former political prisoner and surgeon who served his fellow inmates and his Faith community - is a continual source of inspiration. She considers her work as a concert pianist, a teacher, a frequent music lecturer, and adjudicator of competitions all part and parcel of a life of Faith; her greatest joy has been as a mother to daughter and son, Cynthia and Nick.