Designed and voiced by Sebastian M. Glück, our pipe organ encircles the listener in a manner both heard and felt. Marble’s organ has nearly 6,500 pipes spread over seven divisions - including three that are enclosed. An elegantly-crafted and technologically advanced four–manual console sits in the East choir gallery and commands 101 ranks of pipes. The organ’s orchestral effects and daring musical gestures were designed to perform the great concert literature, lead dynamic public worship, and provide refined accompaniment to Marble’s esteemed choirs under the direction of Kenneth V. Dake.

With a new, technologically state-of-the-art pipe organ, we have a fuller, warmer sound, and richer tone. Many of our old pipes were “revoiced” to create an improved tone, and the addition of pipes created a surround-sound feel by adding a new division to the front of the church, behind the Chancel screens. Two beautiful new organ cases flank the Chancel, reflecting our historic architecture. Each pipe in the organ cases “speaks” – no more façade pipes taking up space while making no sound. The organ chamber, which sits in the Bell Tower, has been significantly enlarged, housing the majority of Marble’s 95 ranks of pipes. A new, elegantly crafted and state-of-the-art 4-manual console serves as the centerpiece of the choir loft. And along with the grand new sound, the persistent problems of the past, which required frequent, costly repairs, are no more. 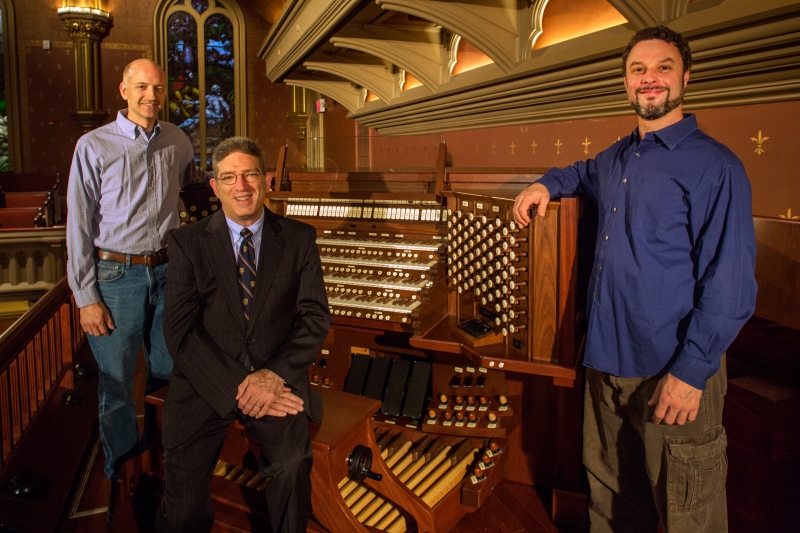 1854: Marble Collegiate Church opens with a mechanical organ in the rear gallery built by Henry Erben (III/40 stops), the most prestigious organ builder at that time.

1891: Marble gets electricity. The enlarged electro-pneumatic organ is built by J.H. & C.S. Odell (III/42 – Opus 296) and moved to the Chancel with the choir; unenclosed Chancel divisions are installed behind façade pipes flanking the Chancel.

1925: Marble commissions the rebuilding of Chancel divisions by the Skinner Organ Company (III/15 – Opus 525), along with a new console.

1937: The Austin Organ Company of Hartford, CT rebuilds and enlarges the entire instrument (Opus 2006), including new windchests and a new console.

1983: The organ is in need of urgent attention. The Austin Company (III/83 – Opus 2689) provides an entirely new organ in the neoclassic French style.

2011: The pipe organ is completely removed to facilitate repair of the roof and Sanctuary ceiling.

2013: Marble’s Board votes to commission Sebastian Glück to redesign, rebuild, and expand the organ, adding some pipework from the Austin Organ formerly at Middle Collegiate Church. Generous bequests from long-time Marble Board members, Dwight D. Rangeler and Susan L. Fischer, provided substantial seed money that allowed Marble to move forward with the project.

At the American Guild of Organists, you can learn more about the history of our organs at Marble Collegiate Church.